When I first started to consider actually carrying a handgun, I began looking at the various models that fit that role.  I knew that I wanted a semi-automatic pistol rather than a revolver.  I love revolvers, but the cylinder creates a lot of bulk for the ammo capacity that it gives you.  I wanted the caliber to be .40 Smith and Wesson (.40 S&W), as 9mm ammunition at the time wasn’t great and I didn’t want the bulk of a .45.  At 6′ 1″ tall and 175 pounds, I’m not a huge guy, so that pretty well meant that full size pistols were not going to work.  Not long before that, Smith and Wesson had released Compact versions of its Military and Police (M&P) series pistols.  They came in the major defensive calibers, including .40 S&W.  The M&P 40c came with a 3.5″ barrel and a 10 round magazine.  Two magazines were included, one with a flat floor plate and one with an extension so your pinky finger had a place to go.  I decided that I liked it and was able to buy one.  It was a great little gun!  It was relatively accurate, easy to shoot, and easy to conceal.  It shot well enough that I actually used it when I started shooting competitively!  I don’t recommend that you do that, but that’s what I had at the time.

In the meantime, Ruger released its LCP, a tiny little .380 pocket pistol that started the current craze for little bitty guns.  I thought that it made a lot of sense, especially since I had discovered that concealed carry was more work than I thought it would be.  It seemed like a great idea to have a smaller pistol that I could just stick in my pocket if I didn’t want to deal with the bigger gun.  And it filled that role nicely.  But with its size came issues.  It was very hard to shoot and impossible to shoot well due to its short barrel, light weight, and incredibly long trigger pull.  I get it, you don’t want a sensitive trigger on a pocket gun, but this was ridiculous.  The .380 ACP round is pretty marginal as a defensive round, but it produces recoil all out of proportion to its size.  That, combined with the pistol, meant that I hated shooting the thing and didn’t practice with it.  I ended up selling it.

So, fast forward to last year.  The Action Pistol group at my club does a big match every year as a benefit for Toys for Tots.  Part of your entry fee is a toy that goes to this very worthwhile program.  Its a lot of fun and we always have a great turn out.  The prize table is also pretty impressive.  I wasn’t too concerned with the prize table last year as I had a terrible match.  I had some ammo issues on one stage and messed up some others on my own, so I wasn’t expecting much.  The way we do the prizes, however, worked to my advantage.  The final scores are divided into thirds; Gold, Silver, and Bronze, with Gold being the top third, etc.  The top finisher in each third gets to pick from the prize table first, that way everyone has a shot at a great prize.  Just by blind luck, I was the top Silver and won a gun!  I could not believe it!  I honestly thought they were yanking my chain, but it was true.

The gun was a Walther PPQ M2 in 9mm.  My first thought was that I could sell it for enough to buy the AR-15 that I was coveting at that time.  But then I picked it up.  I was immediately struck by the ergonomics of this gun!  The grip was very comfortable and angled in a way that lends itself to getting on target quickly.  I liked the way it pointed and the balance was correct.  None of that top heavy feel from which many polymer guns suffer.  Then I tried the trigger.  Wow! Light, but not too light for a defensive weapon, crisp, no creep or grit, and an extremely short, tactile reset.  Yeah, it had the makings of a real shooter!  I decided to keep it and sell my M&P, which ultimately funded the AR, but that’s a post for another time.

The PPQ M2 is the second version of Walther’s PPQ.  The original had the weird European magazine release lever at the base of the trigger guard.  The M2 has a button on the grip behind the trigger guard like God and John Moses Browing intended it to be!  Otherwise, the controls are very familiar to anyone that has every fired a polymer striker-fired pistol.  The barrel is 4 inches long and it holds 15 rounds in the magazine plus one in the chamber.  It isn’t a small gun, but it isn’t a full size service pistol either.  There isn’t a lot of wasted metal or polymer on this gun, so it isn’t difficult to conceal most of the time.  It compares in size to the Glock 19, which is a very popular carry gun.  I think it strikes the perfect balance of capacity, concealability, and shootability.  Click here if you’d like to see the specs on the PPQ M2 or any of Walther’s other offerings.  http://www.waltherarms.com/handguns/ppq/ppq-m2/

At the range, I really started to like it!  The first group that I shot out of it impressed me.  From a rest at 10 ft it put 5 rounds into just under an inch!  I’ll take that anytime out of a 4 inch barrel with factory ammo.  The group was  centered to the left, but that’s pretty typical for me.  A quick adjustment to the rear site and it put round 6 dead center, as you can see.  It showed a definite preference for the factory 115 grain bullets over my 147 grain handloads.  I’m not sure what the issue is, but it may just prefer the lighter bullet.  Either way, it is more than capable of putting the bullet where you want it at any normal defensive range. 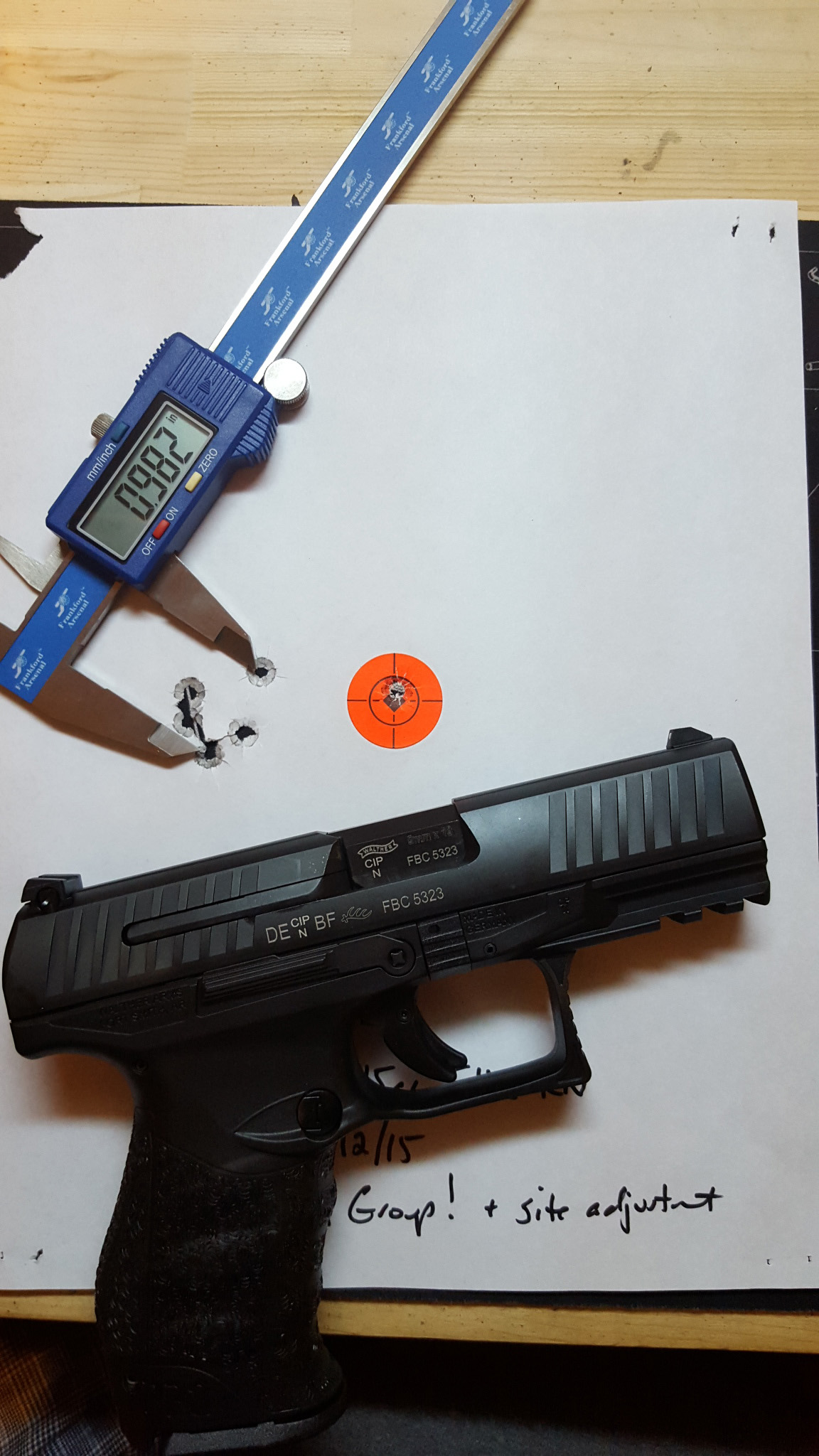 As for ammunition, the 9mm cartridge has come a long way over the past few years.  In the past, the 9mm was not known for its accuracy or its ability to stop bad guys quickly.  A quick trip to your local gun store will clearly demonstrate how much that has changed!  There are dozens of good, accurate, 9mm loads out there now, made with bullets that will ensure that your assailant leaves you alone from now on.  My personal favorite and what I keep in the Walther is Hornady’s Critical Defense round.  Hornady is really on top of the ammunition world right now, and this round is one of their best.  It is made with a 115 grain FTX bullet that has a polymer insert where the hollowpoint cavity is usually located.  This helps produce consistent expansion of the bullet at a wide range of velocities and through barriers, such as heavy clothing.  The recoil is very mild and the round is accurate.  I’ve never had a failure to feed with this load, although I’ve never had a failure to feed with any ammo in the Walther!

That’s what I carry and why.  I’d love to hear from you about your weapon of choice!  Next time, we’ll talk about how I carry.